I wrote this for this week's Flash Fiction Challenge, Message in a Bottle.  Had to make it shorter than the last few weeks' offerings this time, which wasn't nearly as difficult as I thought it might be!  Good stuff.  Keep it Simple, Stupid!  Ahem, sorry, talking to my own self.  ;) 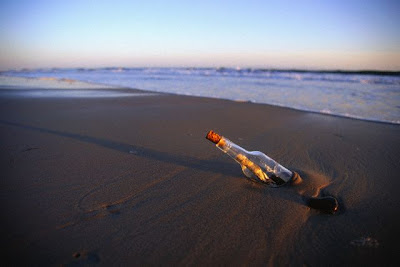 Prince Pirate Charming
The morning sun began to rise over the ocean, dancing its rays across the surface of the water, gleaming and golden. Annie crept out of the beach house as quietly as she could, which was no easy task with the enthusiasm of Asteroid, her white and black splotched mutt of a dog. Annie's daughter Elizabeth had picked the dog out at the humane society three years back, and was insistent she'd take care of him all by herself.
As suspected, after just a few days, the duty fell to Annie instead. At first she had been upset, but time passed and now she and the dog were fast friends. Asteroid was her running companion, and they always had a huge amount of fun running the beaches before they were sullied by footprints.
Hers was a small town tucked in by a little cove, rarely visited by outsiders, and the quiet was a treasured anomaly. The beaches up and down the rest of the North Carolina coastline were packed with sightseers, while their towns' series of beaches were happily quiet, left untouched by the tourism.
The cove itself made for less than advantageous tides, making it a poor place for surfers, though sometimes they would show up and try their luck. They never stayed long. And because of the lack of tourists, there were really no tourist shops either, just the usual supermarkets and gas stations, libraries and churches. All in all, Jeddison was not a terrible place to live. Annie had lived there all her life, and she had always loved it there.
Well, “always” is a strong word. There were moments in her childhood that made her want to run away. The moment her father walked out and never came home. The moment the doctors told her they were sorry, but her Mama died in the church fire. The moment her Aunt Maye came to take her home with her. Annie hated that house, the way it smelled of moth balls and lemon scented cleaner. But she was only twelve and didn't have a choice.
Annie walked the dog down to the water, and looked around to be sure they were alone before unclipping his leash. He wasn't a dog to run off or bite people, so she never saw the harm in letting him have a bit of freedom. She urged him on, and laughed as he ran, hair flopping all about. For an hour they ran together, dog running ahead, turning to be sure she was with him, and running on again.
She laughed when he stopped to play in the foamy waves as they rose and retreated. He always did seem to think he could catch each bubble if he tried hard enough. After a while, though, he tired of his game and busied himself with digging in the wet sand where some lone sea creature burrowed out of sight, trying to get back to the sea.
When she got within shouting range, she paused to catch her breath and called to him. The dog perked up and ran back toward her, lope growing slower. The dog was getting tired, and it was about time to turn back. But as he neared she saw it wasn't the usual sleepy dog run. He had something in his mouth, and was bringing his treasure to her. When he drew close, he lay his find on the ground and sat, tongue lolling happily, watching her.
At first it looked like a root beer bottle, but upon closer inspection, it was a small wine bottle. Too light to be full, but cork shoved back in place. Common litter. She shook her head, picked it up, and took it home with her to discard. When she set it on the porch to rinse off the sand, though, she noticed the sunlight didn't shine through it properly. Something was inside.
Curiosity piqued, she retrieved a corkscrew from the house, said good morning to Darren and Elizabeth, who had risen for the day, and retreated back to the wide porch. The cork was pushed down deep in the neck of the bottle and sealed with some kind of wax, which made it difficult to get it all out in a single piece. Annie ended up breaking it up, having to shake out bits of the cork, and had to fight with a pair of pencils to retrieve the rolled up bit of paper she found inside.
Darren found her sitting on the porch later that morning, stunned, just staring at the note she found by pure chance. The messy handwriting of a sad little girl was apparent even without reading the words themselves. It was a note to Prince Pirate Charming, begging him to come get her and take her away from “this place”. It was signed Annie Houston. She had long forgotten tossing the bottle into the ocean, but there it was in her hand again, and with it came all the emotion of the sad and lonely summer when her mother died.
Her husband sat beside her, held her hand, and listened as tears streamed down her face. She choked back sobs as she told of a little girl all alone in the world, no one to love her. Her aunt seemed cold and distant after taking her in, and she felt unwanted. Now she understood her aunt was overwhelmed, suddenly responsible for a child while grieving a sister.
Annie just wanted to be whisked away and had created Prince Pirate Charming as her own personal savior. Annie had always wanted to live on a pirate boat.
Darren smiled at her and said softly, “Well, I may not be a prince or a pirate, but I do hope you've outgrown your desire to run away.”
“You couldn't get rid of me if you tried,” she smiled at him through her tears and brushed off the bottle. She decided she wasn't going to throw it away after all.

You may use html tags to post links, if you like! HTML code help, if you need it.

Procurement of lovely bits of work can be found here:

To purchase on Amazon, check out my author page, and the list of works there, if you have a Kindle or something with a Kindle application. Thank you!
~R.H~